There’s luck and then there is “Luck” with a capital “L.”  The former version involves the flash-in-the-pan good fortune that visits us all from time to time. The second variety could only be the product of celestial intervention–the kind of luck that could not even be occasioned by a ton of salt over the shoulder or knuckles bruised and bloodied by knocking on a warehouse of wood.

Floating the Grand Canyon requires luck.  A person has to win “a” lottery in order to do it (or at least know someone who did).  But Floating the Grand Salmon requires “Luck.”  In order to float down the Middle Fork or the Salmon, turn the corner on the Main Salmon and then continue down the Lower Salmon to its confluence with the Snake River, a person must win multiple lotteries, only some which are run by man, the rest of which are held by mother nature.

This year I won all those lotteries.  This was my strategy.

One only has to read the description of the Middle Fork of the Salmon in numerous guidebooks, or rafting websites to know that everybody “and their dog” (because Dogs are allowed on the Middle Fork unlike in the Grand Canyon) are going to be applying for a permit to float down The Middle Fork of the Salmon.  Phrases like–”One hundred miles of pristine wilderness”–”thrilling rapids”–”hot springs”–”human and natural history”–and ”lights out fishing”  mean that your odds of winning a permit are zero–unless you have never before applied.   I, too, won the first lottery that I applied for—and then never again.

“Hey, I won a June 10th Middle Fork Permit,” my younger sister said in February of this year.  It was her first time applying for any permit.  But of course it was her first time.  If she were a real rafter and spent her time reading “Did not Win” posts on Mountain Buzz, she wouldn’t have even bothered.  There are people who have been applying for 25 years without winning.

“You didn’t actually win anything,” I said.  “Boundary Creek Road won’t even be open.  It will be buried under six feet of snow.  And, even if it is open, the river level will be too high–somewhere between seven feet and instant death on the guage.  Not to mention the fact that I won’t even be able to be your trip leader because I will be at the National Speech and Debate Tournament with my students.”

“You should just cancel…”

Enter Covid.  Here is the thing about “Luck”—it’s mostly a zero sum game.  As in your good luck is a product of someone else’s bad luck or even your own bad luck.  It’s complicated. This spring I had the good luck of coaching the best speech and debate team that I have ever coached.  Four of my students qualified for the national tournament scheduled for June 14-19th in Albuquerque, New Mexico.  Then Covid.

I suddenly had some free time in early June.

I suspect that the dual nature of luck is often the case with people who have floated the “Grand Salmon.”  Likely as not there is some sad story that has given them the free-time to do it like the loss of a job, or some bad breakup that has given them the motivation to do it. In the words of that famous philosopher Bret Michaels of Poison: “Every Rose Has It’s Thorn.”

STEP 4 | Ignore All Weather and Water-level Reports (but sort of don’t).

This step is crucial.  A Grand Salmon descent involves an elevation change of 6000 feet.  Boaters travel from an Alpine environment down to a low lying desert-like environment. It snowed the night before we launched on the Middle Fork and my last day on the Lower Salmon was 100 degrees.  It is entirely likely that Grand Salmon boaters will encounter every kind of weather on their journey.  If you only like boating within a narrow temperature range, the Grand Salmon is not for you.

And unlike the Grand Canyon, which has raftable flows all year a Grand Salmon trip is water-level dependent–this is mother nature’s lottery.  The Middle Fork of the Salmon has a window of optimal Flows.  Spring-runoff produces dangerously high water levels, and the long days of summer reduce the flow until it is too low for rafts.  The Main Salmon “goes” at any flow.  But at high water some of the rapids can become more intense. We had two flips on the Main.  The Lower Salmon has a rapid called “Slide Rapid” that determines if the river is runnable.  At normal summer flows the rapid is hardly even a rapid.  But above 20,000 cfs it becomes a raft eating monster.

There will be personnel problems and logistic problems.  More than likely you will have a rotating cast of characters for your float–rotating and diminishing.  The Middle Fork is sought after permit.  Likely, you will have zero problem filling it.  But after the Middle Fork you will be on the Main with fewer people.  This isn’t necessarily a bad thing.  At Cache Bar, the take-out for the Middle Fork, you can raid the coolers of those who will not be continuing on.  Resupplying for the Main is difficult because of the distance from the launch to a grocery store.  Dry ice and keeping a cooler taped shut can help with logistics.  Between the Main and the Lower Salmon, Riggins, Idaho is a reliable place for resupply.

After you have completed the Grand Salmon, listen closely for any chance to tell people that you, as a matter of fact, have completed the Grand Salmon.  Mostly, this will consist of listening for key words in a conversation.  Anytime that someone mentions words: Idaho, Salmon (fish or river–it doesn’t matter), rafting, trip, river, fun, water, sun, sand etcetera… feel free to insert your experience into the conversation.  Any eye-rolling will be a clear indication of appreciation. 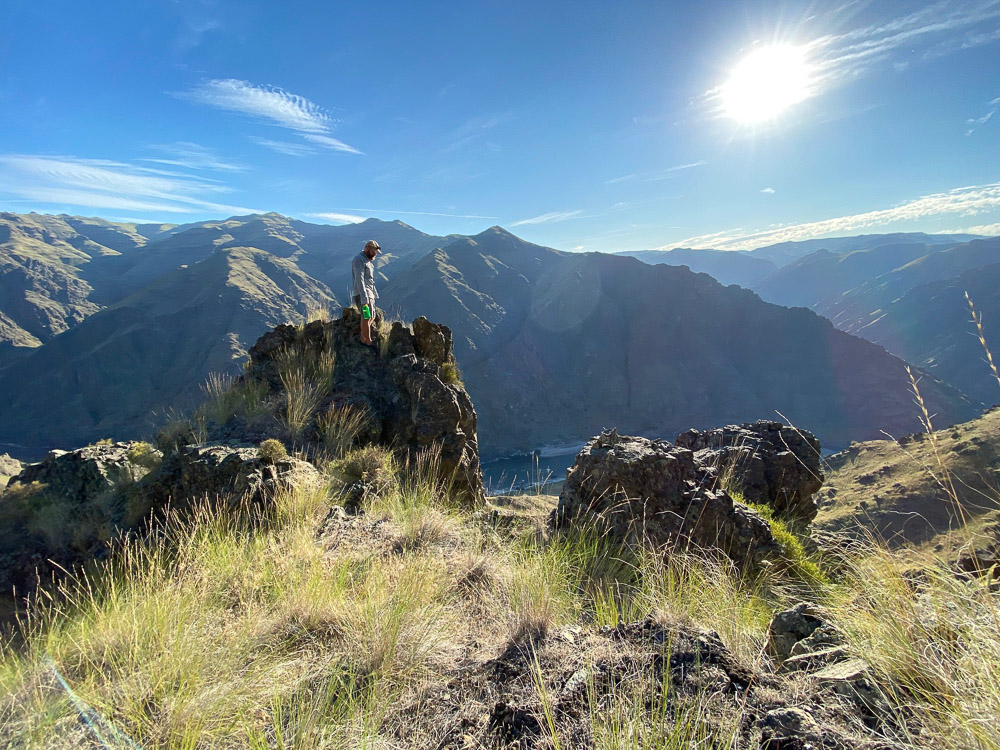