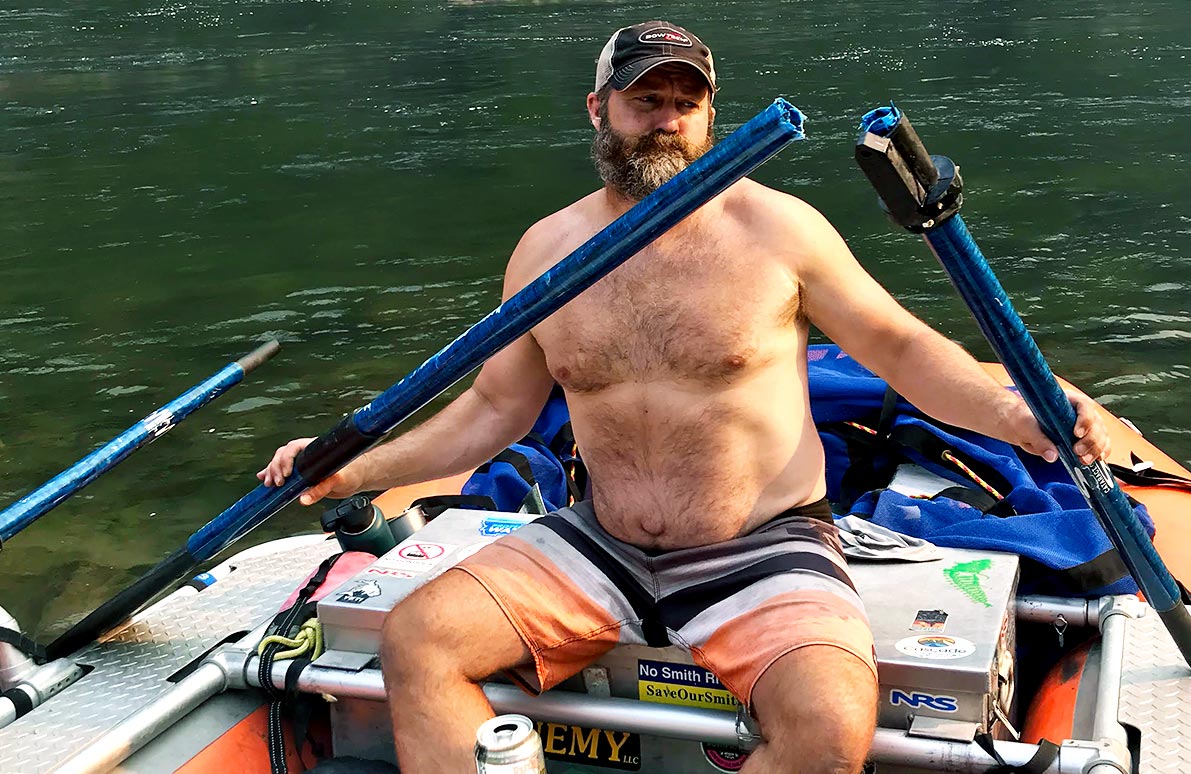 when you owe the duck…

Sometimes a rapid will have feature so scary that it will get its own name–think: the Ledge Hole in Lava Falls, Lucifer Rock in Hells Half Mile, or the Green Room in Granite Rapid.  And sometimes a feature is so scary it becomes the name of the rapid–think: Big Mallard Rapid on the Main Salmon a.k.a The Duck.

I first met the Duck on a legendarily bad Rafting trip (listen to episode #93 of Dirtbag Diaries podcast for more on that trip).   We camped at Big Mallard camp, so I saw the duck, I ate next to the duck, and I tried to fall asleep listening to the roar of the duck.

Let me explain.  The duck is a truck-sized rock on the river-left edge of a rapid.  It is a hazard at every flow.  At low water it becomes a pin and wrapping hazard. And at high water the rock forms a school bus sized hole capable of not only flipping a raft but also deconstructing it.

Running the rapid looks easy—water off a duck’s back so to speak.  The river widens out to the right so missing the scary rock on the left looks totally possible.  But there is a catch.  The bulge to the right is really a pour-over, which means that it’s shallow and it also means the water is pouring over it to someplace else.  That other place?  The duck. The better, safer, run through Big Mallard is to go left and thread your raft through an improbably narrow slot between the duck and the rocky bank.

I was so intimidated by the violence of the hole my first time down the Main Salmon that I opted to go right.  I pulled on the oars with all my might but the angle of the current meant that I was really trying to row back against the river.

As if captured in a tractor beam, the raft slipped slowly toward the duck. Only by exerting unnatural forces on the oars did we miss the hole and then only barely.  The front of my raft floated over and my friend said he saw–much to his terror–the bottom of the duck’s hole—and it had no bottom.   He claims that he still has nightmares.

I’ve run the Main Salmon a number of times since.  And every time I’ve gone left and had clean runs.  But I’ve always felt that the duck was out to get me.

And this summer it exacted its revenge.

The water level was low and so the slot between the duck and the left bank was even narrower than normal.  I set my raft up for the run and prepared to ship my oars to make it through the slot.  But when I tried to ship my left oar, it caught on my over-stuffed Santa Sack that was bulging forward.  There was no time to free it; the water funneled us quickly into the slot.  My raft was loaded with gear and weighed at least 1500 pounds that, combined with the speed of the raft, meant that when my blade hit the rock the oar didn’t have a chance.  The oar snapped in half with a sound like a gun shot.

With only one oar, we toilet-bowled around the duck and into the hole behind it.  Though some miracle it flushed us out.  Lesson: respect the duck—OAR pay the price.

Because they really don’t want me rowing in circles, the awesome people at Cataract replaced my oar.

more from the duck

From the desk of CRG Chief, Angela Sherman, recently back from a Main Salmon 7-day float.

My youngest daughter had been preparing to guide her own boat on our Main Salmon float coming up soon.  Around the dinner table a few weeks prior:  “What’s the hardest low-water Rapid on the Main Salmon?” Sadie asked her older brother who had been guiding on the Middle Fork and the Main all summer. “Big Mallard,” was his immediate reply.  He then added a story about bouncing an 18’ Oar Rig down the rapid on his last run through the rapid. His younger sister said, “Great, that was the only one that I’m not afraid of.”

The Duck must’ve been listening.

We launched on the Main on August 9th after a sisterly scuffle over who got to row which boat. Seniority won the day.  My oldest daughter Lea and her boyfriend, Ian took the smaller raft, and Sadie got stuck with the barge with me, her mother, as a sometimes rower and mostly passenger.

On day three we arrived at Big Mallard. After a quick scout, we pushed off—with Sadie rowing and me jumping behind her on top of the Pacific River Bag, so I could jump in and help if needed.

(A bit of foreshadowing: the day before I had bragged to everyone how I had been the one to add handles on the Pacific River Bags) She takes a great line, but skews the boat a little off angle, which prevents her from pushing or pulling off the left bank in the slot. We go barreling into the left rock, she ships her left oar and I lean down to help.  We slam into the rock and the boat bounces right while I bounce left, feet in the air head-first into the rapid. I swim/tumble through the rapid as Sadie’s boat bounces perfectly into the slot just shy of the duck. I came up coughing up water.  Sadie was crying for her mom, which turned to laughter when she saw that I was okay. In my 30 years rowing rafts, this was my first accidental swim.

At the end of the trip Sadie received the “Best Mom Ejector” award, and I was presented with “Best Boat Acrobatics.” After taking a bow and thanking the River Gods for the awards we packed up and left the duck behind once again a little wiser, but also a little bruised.

have a story from the duck?

Tell us your story in the comments below