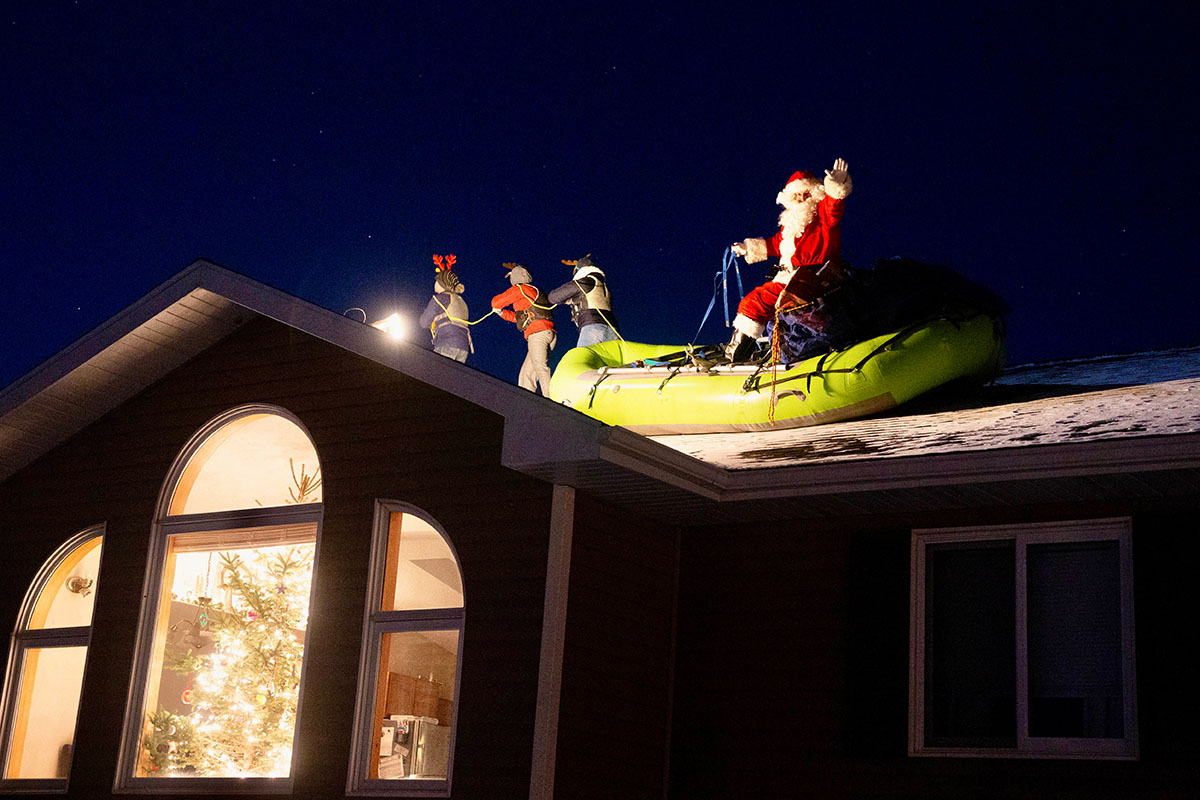 Last fall I had an idea.  Not to brag, but Ideas are what I’m good at.  Details…er…not so much. So I called up a friend who is a detail oriented person.  And we met over a couple of beers.

“Just hear me out,” I said, taking a drink of beer.  “What if we put your raft up on my roof, filled it with presents, and then I dress up like Santa Clause, and get some friends to put on fake reindeer antlers and PFD’s and then you take a picture.  We would so totally win next year’s capture the rapture photo contest.”

“That’s the dumbest thing I’ve ever heard,” my friend said.  Then he paused.  “And why my raft?”

“Because mine is rolled up and put away,” I replied. I smiled because I knew he was definitely “in.”

Right away my friend started to organize the details.  He decided that we needed to watch the forecast in order to get the raft up on the roof before it snowed, so that it would be covered by an aesthetically pleasing dusting of snow and we wouldn’t have boot tracks all over the roof.  We would need the right angle and some strategically placed lights.  We would also have to find a Santa Suit somewhere.  For a Santa sack we could use my () filled with fake presents and dry bags. And the reindeer could be harnessed to the sleigh with a throw bag line.  With the actual execution of the plan months away, the whole process was easy, painless, and perfect.

Weeks went by.  No snow.  Thanksgiving.  No Snow.  I got the Santa Suit from my Father-in-law. No snow. Christmas. No Snow.  I hit an After-Christmas-Sale for fake reindeer antlers. No snow.  Finally, a few days before New Years Eve we got a forecast that promised a little snow–on the night of a full moon no less!

I called together an impromptu party. Friends who had seemed really interested earlier in the fall, seemed less interested. The night was forecast to be cold and windy, too windy to put the raft up on the roof in advance of the snow lest it blow off the roof and down the street.  Still, I dutifully dug out rafting gear and wrapped fake presents.  On the 29th of December it did snow.  A 30mph wind, however, blew most of the wind off the roof.

I called my friend, “Tonight’s the night.”

There was no more time.  My wife was threatening to take down the Christmas tree, which had to be in the picture.

My friend wasn’t excited.  “I don’t want to stand outside in the cold for three hours and end up with a bunch of bad pictures.”

I assured him that bad pictures take almost no time at all.

As evening approached it became apparent that none of my friends were going to show.  My friend’s raft was an Aire 143 D–not a monster by any means–but heavy enough with the frame that a couple people wouldn’t be able to heave it up on the roof.

I needed my dad’s tractor.

At four in the afternoon, I drove my dad’s tractor down Vanocker Canyon to the house.  We loaded the raft onto the bucket and lifted the raft up to the roof, only taking a small section of the gutter out. By dark the only people who showed up to the party were my mom and her husband, my really reluctant co conspirator and my dad.

My wife and kids would have to be reindeer.

It will be next year’s Christmas Card Picture.”

The next three hours were not so different than a multi-day rafting trip.  Our photo shoot involved teamwork, discomfort, danger, drinking, and wrestling heavy and awkward gear up steep inclines.

The raft nearly slid off the roof until my mom’s husband helped tie it to the other side of the house.  My dad helped to secure some supplemental lighting, my mom frostbit her fingers trying to get a decent picture, and then she used her frozen fingers to call another photographer who was confused but helpful regarding night shots.  Presents blew off the roof.  My neighbors gawked out their windows at the green raft on the roof with Santa and some very cold and unhappy teenage reindeer who were swearing at Santa.

Did we get a photo destined to win next year’s Capture the Rapture Photo Contest?  Probably not.  But we made some memories.  We got to mess around with our rafting gear in the middle of winter.  And we definitely created next year’s weirdest family Christmas Card.

So if you’re Jonesing for some river time, invite your friends, dig out your gear and take some photos 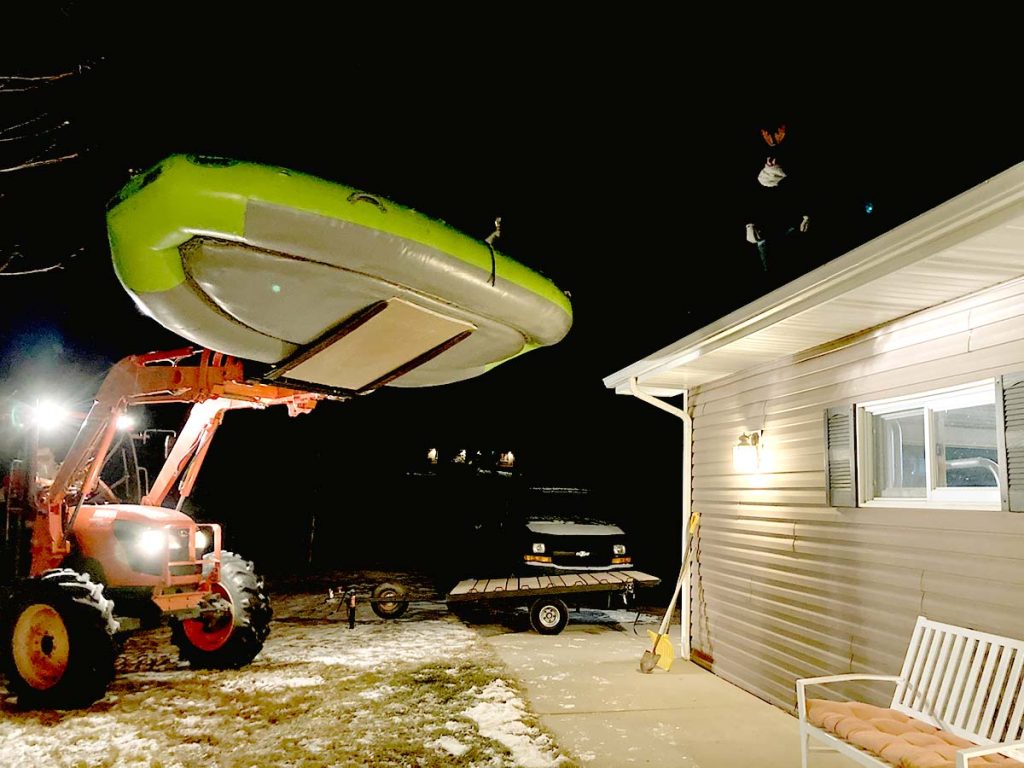